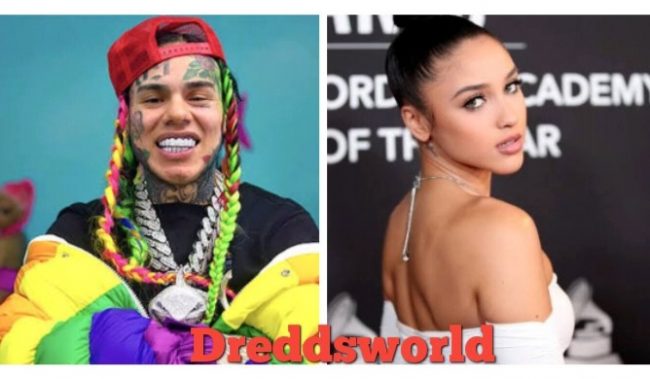 Tekashi 6ix9ine is currently in a relationship with Jade but it appears there’s something going on low-key between him and Latin singerar Mariah Angeliq as fans would presume.

It’s most likely that 6ix9ine and Mariah have a collaboration on the way with no strings attached, but fans are already spreading rumors on a supposed romance between the two.

The dating rumor started after Tekashi and Angeliq were spotted together at the club last night. Although there were no touching, hugging or kissing, folks online are not convinced they don’t have something going.

Mariah Angeliq is an American trap and reggae-ton singer and songwriter. She premiered her first EP titled, “Normal” on August 24, 2020. Her label, Universal Musica, stated in a press release that Mariah’s “authentic and real vibe,” which she calls “normal,” inspired the name of her first album.

She gained notoriety through her hits “Gracias” (Thank You) and “Perreito,” which went two-times platinum by the RIAA in the US and Puerto Rico. In 2020, Billboard named her as a “Latin Artist on the Rise.”

Mariah goes by the nickname Princess of Miami. The 21 year old is a Fashion Nova partner, the same brand Cardi B dropped a collection with in 2018. She’s also worked with celeb favorite, Sugar Bear Hair.

Britney Spears Blasts Closest Friends Who Never Showed Up For Her