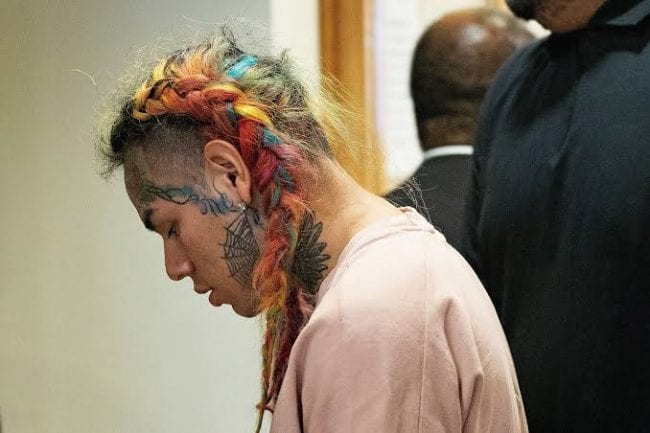 Tekashi 6ix9ine Reveals He Contemplated Committing Suicide While In Prison

Tekashi 6ix9ine recently had his first video interview post-prison with The Shade Room, in a bid to boost his flopping album sales. And he did so, taking a subtle jab at Justin Bieber by wearing the singer’s Drew House brand hoodie.

The rainbow haired rapper sat down with TSR to discuss everything in his life and career without any filters.

During the interview, Tekashi revealed that he pays $15,000 for each of his lace front wigs. However, he also said he considered committing suicide when he was in jail after snitching on his co-defendants.

FIRST EVER SIT DOWN INTERVIEW EXPLAINING EVERYTHING. INTERVIEW ON YOUTUBE LINK ON MY IG STORY!

“The pressure is so strong. Mentally, I think people would have attempted suicide. At a point in jail, I thought about it. It’s so much stress, so much pressure, because you’re seeing yourself on the news every day,” he explained

“This, that and a third, when is this going to come to an end? With the asthma and the coronavirus, I caught bronchitis once and two asthma attacks in prison.”

The ‘Tattle Tales’ rapper continued, “When I caught bronchitis, they sent me to the hospital and the doctor said, ‘What’s going on in that jail? Why is it so cold in that jail?’ I remember, I’m handcuffed … to the bed.”

Summer Walker & London On Da Track Reconciles, Follow Each Other Back