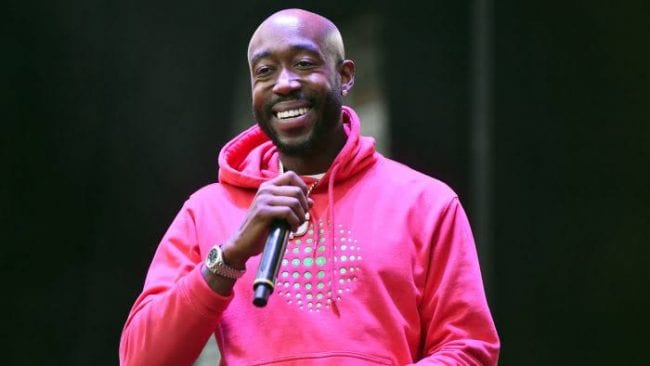 Well respected hood rapper Freddie Gibbs, has been degrading DJ Akademiks on social media since last night and it appears he’s not even done yet with the Instagram blogger.

It all started when Ak attempted to trash Freddie Gibbs by saying the rapper is irrelevant, in reaction to Gibbs saying Jeezy is musically irrelevant.

The two soon went on a social media shots tirade and 6ix9ine was later mentioned in the beef with scathing accusations on the rainbow haired rapper. “I want proof that u didn’t have oral sex with Tekashi [6ix9ine],” Freddie said.

@akademiks I ain’t done with U pussy. I’mma torture U until U quit your job. And whoever else want smoke holla at Big Rabbit. 🐰💨

AK then summoned 6ix9ine to give him tea on Freddie and the outed snitch wasted no time in snitching again. 6ix9ine claimed that Freddie Gibbs was “shot” by one of his former Treyway friends “Harv.”

During their shots tirade Gibbs said Ak was “built like a Teletubby.” Ak was clearly too inebriated to even clapback properly, stating that he’s built like Gibbs’ bank account before deleting the tweet. Gibbs is now selling “Fuck Akademiks” shirts with the teletubbies meme.

The merch is sold in black and white, the front of the shirt includes a meme of Akademiks’ face plastered onto a Teletubby’s body while the back of the shirt reads, “Akademiks Is The Police.” The shirt’s are selling on good-crack.com as part of the “Fuck Akademiks” collection.

“All proceeds go towards gettin this fuck nigga out the rap game,” Freddie tweeted out along with a link.

All proceeds go towards gettin this fuck nigga out the rap game. https://t.co/AdACv5vOb4