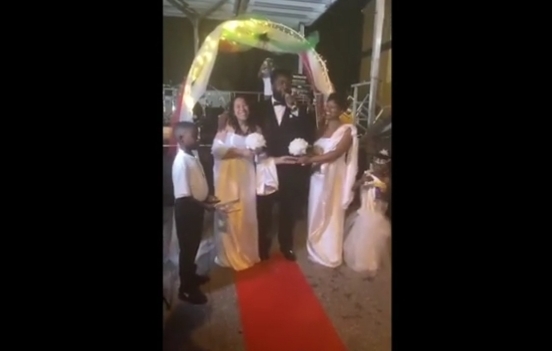 Dr. Umar Johnson is a popular online Black activist with thousands of social media followers. Yesterday a video surfaced which purports to show the activist getting married to two women at the same time.

In the video, Umar walks down the aisle with two beautiful women – and praises each of them, before exchanging vows in front of a crowd, who cheers them on. Watch the clip below:

Umar Johnson is a school psychologist, author, lecturer, and community activist whose ideology is Pan Africanism. Johnson is the author of the book, Psycho-Academic Holocaust: The Special Education & ADHD Wars Against Black Boys. Dr. Johnson has appeared in the first three volumes of the documentary series Hidden Colors., Out of Darkness, and Wilmington Fire.

Currently, Dr. Johnson is in the process of building a private school for boys in Wilmington, Delaware in which the curriculum will be based on African centered principles and beliefs – called the “Frederick Douglass Academy.”

Johnson has received harsh criticisms about his ideology and beliefs in which some consider him a fraud for his fundraising tactics for his proposed Frederick Douglass/Marcus Garvey Academy in Delaware.

But Dr. Johnson insisted that he hasn’t spent any of the money raised for his school.

0
Related Topics:Dr. Umar Johnson
Up Next