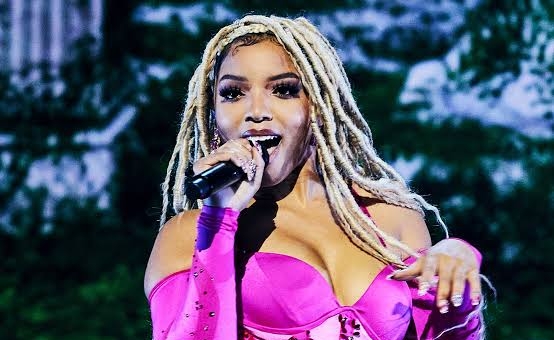 Chloe Bailey made her solo performance debut with “Have Mercy” at Sunday night’s MTV VMAs, and had what many are calling an embarrassing “tampon” reveal while dancing on national television.

The former Disney actress/dinger commanded the VMA stage with obvious star power – that largely overshadowed the night’s other performances.

Introduced by her sister, Halle Bailey, Chlöe opened “Have Mercy” with an amazing vocal prelude that showed off her extensive vocal range – then backed up by a team of varsity-jacketed dancers, as she began her dancing routine her.

It started off fine – unfortunately, half way through the set, something went wrong.

Chloe who was scantly clad in her pink thong leotard bent over -in what was supposed to be a sexy dance move – and accidentally exposed her feminine hygiene product.

Watch the embarrassing moment below:

Dr. Umar Johnson Gets Married To Two Women At The Same Time – Video