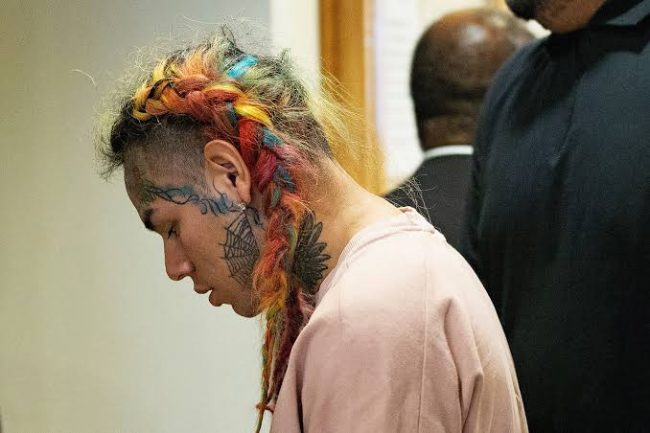 Tekashi 6ix9ine’s security team  are facing some serious charges after they went on a wild chase in Harlem to find a man who captured footage of the rapper on his cell phone.

According to The Daily Beast, five members of 6ix9ine’s team, which includes a former NYPD police officer, have been indicted on charges of robbery in the first and second degree, as well as first-degree criminal impersonation.

Manhattan District Attorney Cyrus R. Vance Jr. detailed the alleged criminal actions in a press release, explaining that the rapper’s muscle chased down a 34-year-old with SUVs with flashing lights and sirens, similar to a police vehicle.

The press release says that the man was with his girlfriend when he tried to capture a video of 6ix9ine in the flesh. However, tensions began flaring up once the man filming was spotted by security who yelled at him and chased him as he tried to drive away.

Daniel Leperuta, a retired NYPD detective, is among the defendants involved in the case. He’s accused of using his NYPD personnel identification and attempted to pin the blame on the victim. Laperuta claimed that the victim had attacked them with a firearm.

Laperuta is accused of joining the chase before pulling over the victim, opening his car door, unbuckling his seatbelt, and knocking his phone to the ground. Another member of 6ix9ine’s crew is accused of stomping on the device.

As actual police officers made their way to the scene, 6ix9ine’s security had reportedly fled the scene, though Laperuta went to the police afterward where he doubled down on his claims of being threatened. He later retracted his statement once he was pressed by the lieutenant.

“A celebrity entourage is not a police department, and Manhattan is not the Wild West,” Vance wrote in a statement. “As alleged, these highly-compensated vigilantes caravanned through the streets of Harlem with sirens flashing in order to track a man down and steal and break his phone.

False reports—especially about firearms—can carry devastating consequences and fortunately, no one was injured or killed in the actual police response.”

0
Related Topics:Tekashi 6ix9ine
Up Next