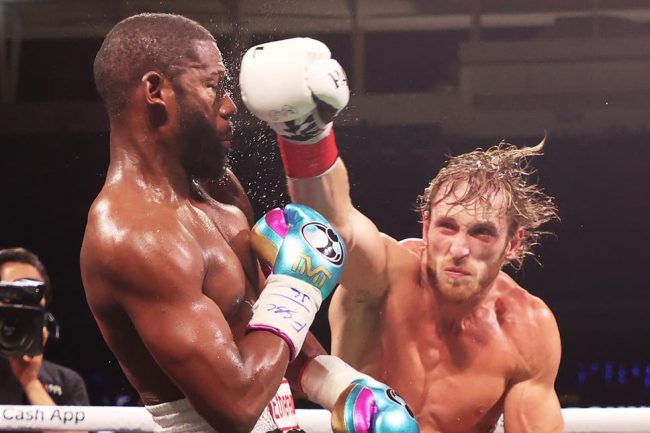 Video Shows Floyd Mayweather Knocked Out Logan Paul, But Held Him Up To Carry It Through 8 Rounds

However, a video clip posted to Twitter appears to show that boxing champ Floyd Mayweather did knock out YouTube star Logan Paul — but held him up until he came to.

Fans were shocked that Logan lasted all right rounds and have been clowning Floyd since the fight… but in the brief clip, Floyd lands a punch before Logan slumps forward — appearing to lose consciousness for a few seconds. Floyd actually hold him up until he regains consciousness.

Floyd Mayweather actually knocked out Logan Paul, but held him up during the fight to carry it through 8 rounds 👀 pic.twitter.com/Y4JSimELIr

“Floyd Mayweather actually knocked out Logan Paul, but held him up during the fight to carry it through 8 rounds,” the tweet from FootBasket.com reads.

Some have speculated that there may have been a clause in the contract between the fighters that Floyd was not allowed to win the fight by a knockout.

Floyd says the fight was just to give people a show.

“When the money comes, we’ll see who is the real winner,” he said. “At the end of the day, I’m going into the Hall of Fame for boxing. I have nothing to prove.”