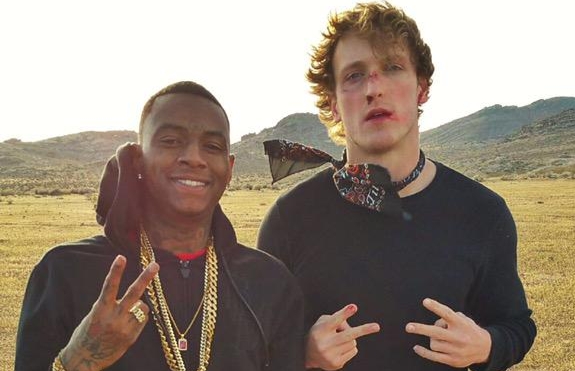 Soulja Boy is undoubtedly the first to use social media to his advantage in the music industry, and lately, he’s demanding credits for almost every trend in the entertainment world.

Soulja Boy claimed he’s the “first” rapper to plug Icebox bling but unfortunately, the shop couldn’t care less … especially since they say he still owes them. He later claimed he’s the first rapper to rap about Bitcoin but, was quickly checked by a fan.

Apparently, Soulja Boy dug through the Twitter archives because he retweeted a post from Paul that dates back to 2015. In it, the two stars pose next to one another while Paul displays injuries to his face—makeup from the set of a music video. Soulja used it as the perfect opportunity to troll the vlogger-turned-boxer.

“The day I punched him down [boxing glove emoji][sidewayscrying laughing emoji,” he tweeted.

“I invented Logan paul.” The reactions were plentiful and fans are asking for the two to meet in the ring.

The day I punched him down 🥊 🤣 I invented Logan paul https://t.co/gisc0bpp6V