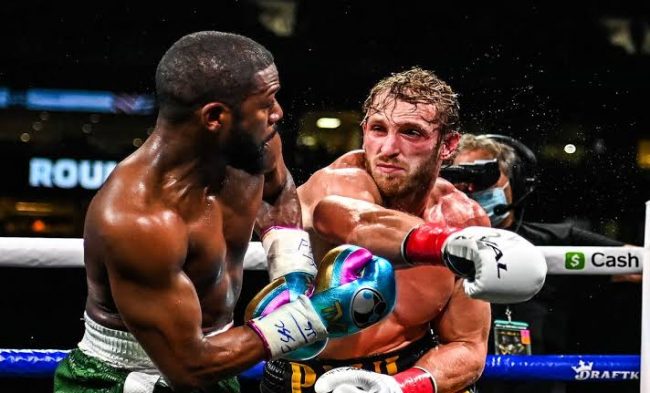 Logan Paul Denies Being Knocked Out By Mayweather: “Shut The F*ck Up”

The Logan Paul vs Floyd Mayweather fight have been generating lots of reactions online with many being disappointed about the outcome. Logan’s brother Jake Paul was also roasted on Twitter for claiming his brother won the fight.

However, a video which has since been making rounds online suggested Floyd Mayweather actually knocked out Jake Paul but held him up to keep the fight till the 8th round.

Critics said that Mayweather wanted the fight to go all eight rounds and that’s why there weren’t any big blowout moments, and rumors circulated that Paul really did blackout. Well, Logan has now come out to deny the claims.

“Morning after the fight,” said Paul in a video as he inspected his face. “Not too shabby for fighting the best. I’m seeing this narrative going around that—there’s one part in the fight where Floyd punches me and I kinda like, leaned on him a little bit and it looks like I kinda went limp and people are trying to spin it and say that he knocked me out and caught me and kept me up to keep the fight going to the eighth round.”

“Shut the f*ck up,” he continued. “Like, just shut the f*ck up. Like, stop trying to discredit what happened last night. Make no mistake, he got a lotta good punches in. I got f*cked up a couple shots. I didn’t know my face could make that shape, but never rocked, never blacked out, never, obviously, got knocked out.”

“He didn’t help me up. He tried to take me out and he couldn’t. It was great.” Listen to him below: