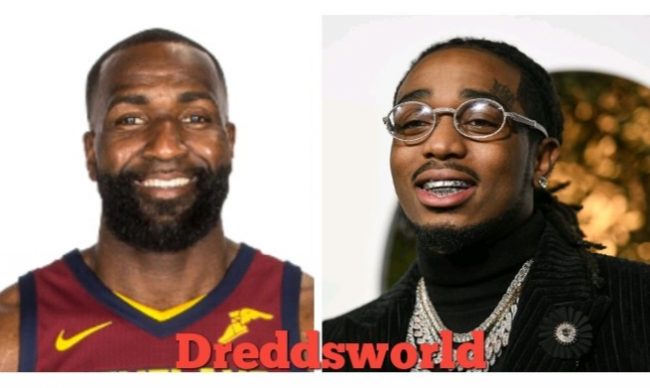 Kendrick Perkins is still at odds with Quavo over the rapper’s bar which pit Perkins as the butt of an ill-received joke in a punchline from bars on his 2018 Huncho Jack collaboration album with Travis Scott.

Perkins reignited the beef on June 6 with a tweet he sent out aimed at Quavo. “I see @QuavoStuntin still dropping them trash a$$ bars!!! Carry on…” Perk wrote.

I see @QuavoStuntin still dropping them trash a$$ bars!!! Carry on…

Quavo quickly responded with a clap back of his own on Monday, sharing a candid screenshot of the former NBA champion anchored by a blatant plug for C3.

Thank God you’re back with the Migos because this photoshop uppercut is as close as you’ll ever get to a hit as a solo artist! Carry on… https://t.co/nVOrvsaLIA

Well, ESPN’s First Take decided to have Quavo on the show today where they had him hash things out with Perkins. As you will see in the clip below, it was mostly Perkins who did all of the talking as he tried to explain all of his bonafides to Quavo.

Meanwhile, the Migos honcho continued to laugh during the whole exchange as he found Perkins’ passion to be amusing.

Quavo was quick to remind Perkins that he wasn’t exactly a superstar player. By the end of the segment, both men came to the conclusion that it’s all jokes and there is no real animosity between them.

Pooh Shiesty’s Bond Revoked, To Remain In Jail Until Trial