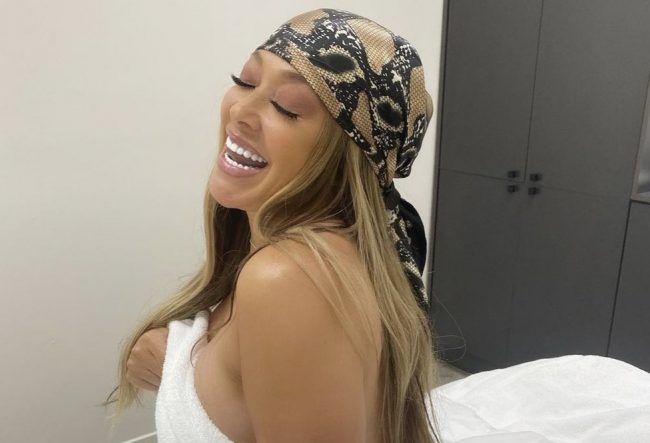 Over the weekend, Jordyn Wood’s mother, Elizabeth Woods, set social media on fire when she posted some pretty explicit pics on her Instagram page.

Elizabeth posted two thirst trap photos, and it has the Internet talking for a few reasons.

One reason is that she shared a topless photo which came with mixed reactions. Elizabeth was praised for having a banging body at her age while some criticized her for doing thots sh*t.

The other is that in one of the pictures, she resembles Lala Anthony.

Jordyn Woods’ mom looks just like Lala when she smiles

Jordyn’s mom Elizabeth is a very well connected marketing executive who has worked with Jada and Will Smith, Eddie Murphy, and tons of Hollywood A-listers throughout her career.

Last year in January, online critics accused Jordyn of having plastic surgery. Mama bear Elizabeth stepped in and checked the haters. “Jordyn is my daughter which means she has my genetics,” she wrote.

“We have ass naturally! No one has gotten any butt lifts..this is one of the craziest things that I keep reading..let’s focus on important things everyone and make a positive change.”