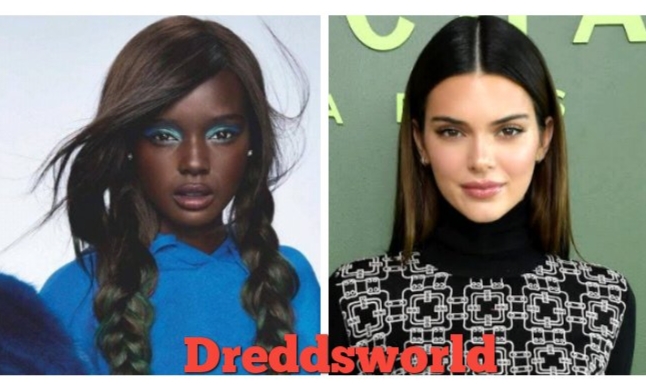 Duckie Thot recently shared a stunning pic to her social media accounts on Tuesday while promoting the season finale of the show “Glow Up BBC.”

Duckie can be seen rocking a neutral green leather snakeskin top with a matching skirt along with the perfect glam to her face and hair.

While fans were also admiring her beautiful glowing skin, one fan pointed out something else. A Twitter user responded to her photo-post and called her “The Black Kendal Jenner

Although it may have been meant as a compliment… many people were not here for it. One fan said, “Nope she’s just Duckie Thot We gotta stop seeing ourselves as a black version of white ppl when we good at something.”

Another added, “Do y’all ever go to Kendall Jenner’s pictures and say the white Duckie Thot? Disrespectful.”

A furious fan wrote, “This is a madness… A sickness… What I see is a black gal being black and looking good BEING BLACK not emulating a white girl.”

Duckie responded to the comment herself, simply saying, “lol y’all need to let this comparison go.”