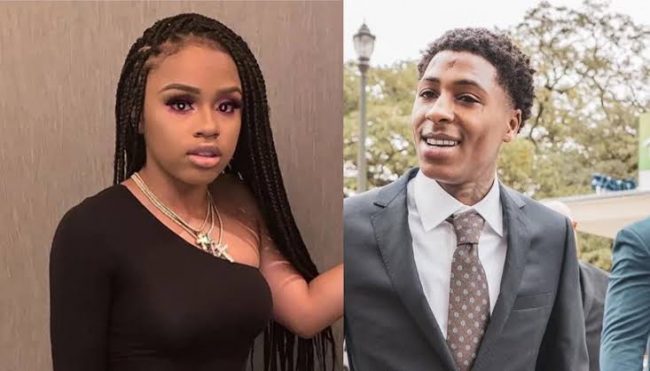 We reported on Monday that NBA YoungBoy has been arrested and put into federal custody after running from the authorities when his car was pulled over.

The LAPD and federal authorities attempted to pull the rapper over due to an outstanding federal warrant, and he has remained in police custody since he was found shortly after running off.

Kentrell is currently facing two charges of possessing a firearm as a felon, which has him facing a maximum sentence of ten years in prison.

Lawyers have said that it will be “hard [for NBA Youngboy] to avoid jail time” since he was a felon in possession of a firearm, ran from the police, and has had prior charges involving guns.

One of YoungBoy’s baby mamas, Yaya Mayweather, the daughter of boxing champ Floyd Mayweather, took to Instagram story on Friday night to express her wishes for NBA Youngboy to be freed.

The two share a boy Kentrell Jr., who is named after the rapper’s government name. In a Boomerang video, Yaya shows off Kentrell’s onesie, which reads, “Free my daddy,” alongside a picture of Youngboy.

However, folks on Twitter have been clowning Yaya for doing too much barely a week after the rapper’s arrest.

See some hilarious reactions below:

it’s no way i’ll buy my son a “free my daddy” shirt if his father got locked up lmao…yaya….yaya girl…that ain’t it lol

Yaya Mayweather when she found out NBA Youngboy got arrested pic.twitter.com/i1fM5ferJ8

Yaya mayweather trying to convince the cops to let NBA Youngboy out of jail pic.twitter.com/2R9cDLrvTA

yaya mayweather wanna be a hoodhoe so bad 🤣

Yaya Mayweather posted “#FreeKentrell” and someone on the Shaderoom commented
“Free YO MIND GIRL!”
💀💀💀 pic.twitter.com/LqfUVlhGaI

gm to everyone except Yaya Mayweather simple ass pic.twitter.com/Ta9vQdB12E