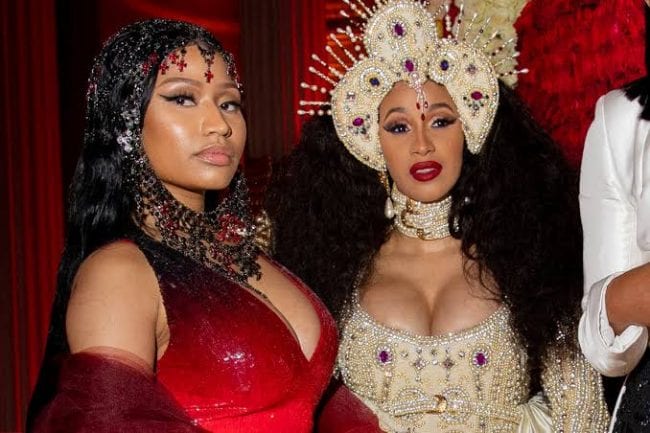 Cardi B and Nicki Minaj‘s beef seem unreconcilable after kicking off a heated feud years ago, which included a shoe-throwing incident at New York Fashion Week.

However, rumors has it that Cardi B and Nicki Minaj are putting their differences aside for a brand new collaboration, which would surely break the internet.

Although there is no evidence that the two are working together on new music, there are reports that an alleged snippet exists for a song titled “Lavish”. In addition, Cardi is teasing a major collaboration that is set to anger a lot of people, and fans are speculating that it’s with her longtime rival.

The Bronx rapper took to Twitter over the weekend, teasing a new record that she said would make some people mad.

“Since ya mad ..imma give ya something mad to be about …..This next single and coll- ….Gonna have ya sick ….since ya here,” Cardi tweeted.

The ‘Wap’ rapper didn’t reveal who the song is with but, given the fact that she was in the middle of tweeting about her own fanbase’s feud with the Barbs, it’s possible that she could be referring to “Lavish”.

Since ya mad ..imma give ya something mad to be about …..This next single and coll- ….Gonna have ya sick ….since ya here 😉😉😉😉