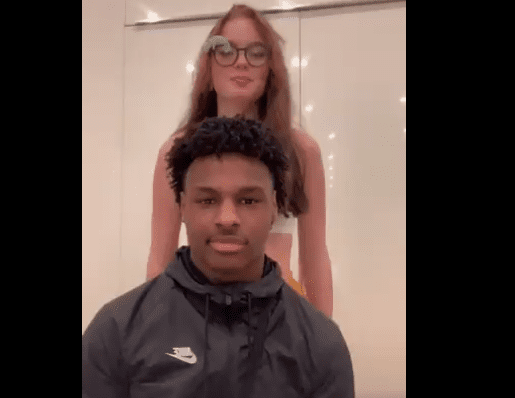 LeBron James‘ 15 year old son Bronny is going viral on Twitter this morning, after posting a video with a female friend who is Caucasian.

He is the eldest son of professional basketball player LeBron James, and lately the teen has become more active on social media.

For everyone wondering why Bronny is trending, this is why. pic.twitter.com/AHMw26gDvm

YesterdayBronny posted a video with a girl that many believe is the NBA star son’s new girlfriend. The video was cute, playful, and innocent.

But Black Twitter immediately flew into a rage. They are upset that the billionaire son is dating outside of his race.

See some reactions below ;

“AYO BRONNY how many times I gotta tell you about black twitter” pic.twitter.com/sgxBweJDZL

Bronny can’t be around a white girl without black twitter going in a uproar.. y’all need to get help smh pic.twitter.com/hirlPNQlzr

Bronny on the TL with a white girl?? pic.twitter.com/bKSvfbYNdp

Bronny 15 and y’all worried about who he dating pic.twitter.com/m9cpZ6V5sE

See Bronny trending. See people mad. Do people not realize where Bronny lives and what school he goes to ? You going to date who is around you. Bronny is around basically all white people. So who do you think he was going to date ?