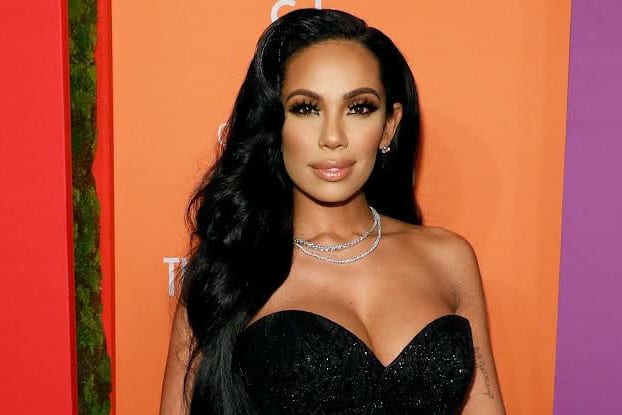 Safaree Samuels and his wife Erica Mena have been stunting in recent times. Back in February, Erica Mena gave birth to a baby girl, welcoming her first child with her rapper husband. Not long after, the love and hip hop star joined her man in opening an OnlyFans account.

The couple were faced with backlash at the time but they somehow didn’t care about critics. “We so broke So don’t forget to subscribe Y’all !” Erica wrote.

Well, yesterday, the couple pulled another stunt. Probably they forgot Instagram is not OnlyFans as they both shared same NSFW pictures on their pages. In one of the home photo shoot, Safaree is on his back as Erica lays on top of them and they show a bit of tongue action.

This love is a real friendship that caught fire. ♥️ shot by the great @mr_guerra

In the second shot, the reality stars pose for the camera and Erica shows a bit of her backside in her lowered jeans. “This love was a real friendship that caught fire,” Erica wrote in the caption.

“Grow old along with me, the best is yet to be.” Safaree penned, “Put your focus In the ones you love, keep ya circle tight and don’t take life for granted. Thank God,” Safaree wrote in his.

“Without a solid 1 in ya life your assed out. It’s time to celebrate life and where I’m at this time around the sun. My birthday this Saturday so it’s time to turn it up a knotch,” he captioned the second photo.

Grow old along with me, the best is yet to be. – Photo by @mr_guerra

💎 Put your focus In the ones you love, keep ya circle tight and don’t take life for granted. Thank god 🙏🏾 📸 @mr_guerra x @blu_gem_ We make our own magazine ads 💪🏾 #cancerseason STRAIITTTT