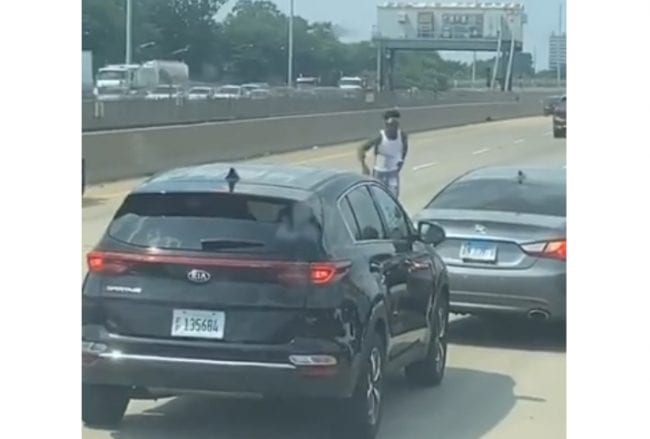 Chicago Gangs Shoot It Out On Busy Expressway During Rush Hour

According to MTO, a group of men described by police as “gang members” got into a shootout in the middle of rush hour traffic on one of the busiest freeways in the United States.

The incident popped off yesterday in the middle of rush hour. Thousands of people were stuck in bumper to bumper traffic on Chicago’s busy Dan Ryan expressway.

The Dan Ryan Expressway covers a stretch on Interstate 94, one of the biggest and busiest freeways in the United States. Here’s the police scanner, describing the shooting:

it sounds like this might have been a rolling gun battle on the e-way. there’s a shot up Audi on the e-way w/ blood in it. #Chicago #ChicagoScanner

Witnesses on the scene detailed that three males jumped out of the silver Audi and started firing at a black Audi. All men were described by the witness as “gang members.”

One man was taken to the hospital with multiple gunshot wounds. That man can be seen running down the busy highway in the above video, holding his wounds.

Chicago police reportedly said the man claims that he was first shot at on 99th and Michigan. Police claim that the man allegedly told them he and the shooters got into a gun battle for miles – and all the way down the Dan Ryan expressway.

Broad daylight shootout on 94 in Chicago.. guy had a gunshot wound to his side running down one of the busiest highways in the country