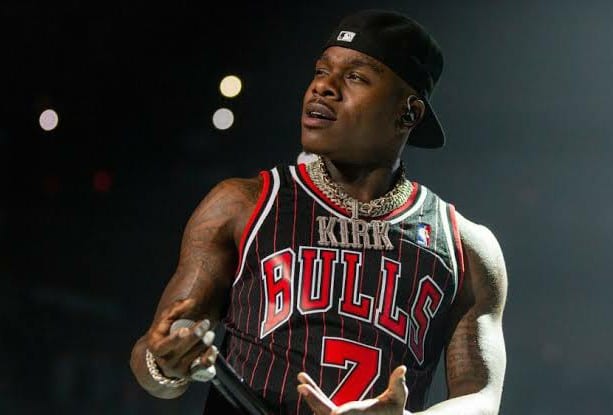 DaBaby’s Baby Mama Exposes Him For Impregnating Another Woman

Couple of weeks back, rapper DaBaby and his baby mama MeMe served couple goals in adorable pictures as wedding guests. But today she’s exposing him for allegedly impregnating another woman.

The pair have maintained good relationship while co-parenting their baby until she found out controversial texts on the rapper’s phone.

MeMe took to Instagram to expose her man for allegedly impregnating another woman. On her Instagram Story, she shared a photo of DaBaby’s incriminating text convo, which is dated December 30.

#TSRBaeWatch: #DaBaby and his boo/mother of his child looking unbothered in their color coordinated 😍❤️👏🏽👏🏽

An unnamed sidechick tells him that she doesn’t “feel good” and he responds by trying to arrange a meetup. He then requests her account information so he can pay for her transportation. “Don’t fall for the cap,” MeMe typed out on top of the photo.

“Another child on the way and it ain’t me.” She continued criticizing him for his capping ways. “Your favorite rapper is the number 1 capper,” she reveals. “Don’t believe half of what social media is showing you.”

And in another post to her story, MeMe is heard telling DaBaby, “I’m gonna show all your fans that you’re policing your child’s mother.” While we don’t find out exactly what form of “policing” she is referring to exactly, we know there is some drama going down in the Kirk household. In light of this situation, we could say that DaBaby’s cheating anthem, “iPhone”, did not age well.

See it all below :

#PressPlay: #DaBaby’s baby mama #Meme is putting him on blast and alleging that another woman is pregnant with his child 👀 she claims “Your favorite rapper is the number one capper”