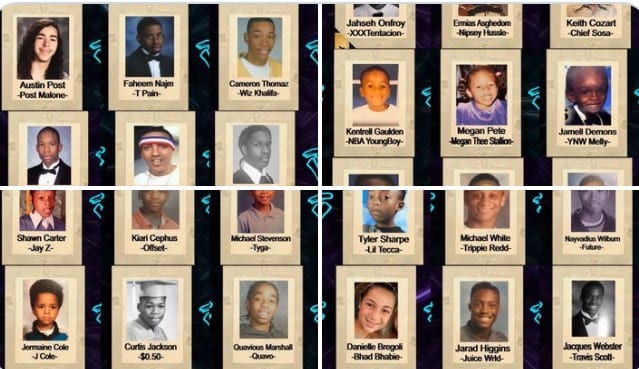 Viral Photos Of 36 Rappers As Kids

A twitter account ‘Culture Central’ made a photo compilation of 36 rappers as kids. The viral photos are from yearbooks or school photoshoots.

The ages of the artists range from as young as toddlers to as old as high school seniors. But some of the details are wrong like the photo claiming to be T Pain is actually a young Lil Jon.

The post is mostly accurate. Photos of plenty of the best and some of the most mid of the rap game are included, from OGs to newcomers, and some who are now dead.

36 of your favorite rappers as kids📷 pic.twitter.com/m3pjlypFaB

There are lots of trolling on the old photos with YNW Melly’s large head getting most of the savages. See some reactions below :

Melly had Murder on his mind 💀

So we just gonna ignore that young YNW Melly be lookin like that guy from Sky High 💀 pic.twitter.com/D5xOYWLc1l

boutta slap this man and hear a rattle pic.twitter.com/0kAprXptrE

Imagine if someone told you this MF would be ruling hip hop in 10 years pic.twitter.com/z4WkCmXc4C

Imagine seeing this kid irl and someone tells you he’s gonna become one of the best rappers ever pic.twitter.com/9yNwwpIkEM